The East Central District Platinum Award recognizes outstanding professional service among district PRSA members. Every year, the ECD presents one Platinum Award in honor of former national PRSA board member and ECD PRSA board chair Donald P. Durocher, APR, Fellow PRSA. In Durocher’s memory, the district board recognizes a practitioner who has achieved a distinguished service record and is clearly identified as a role model for other professionals through chapter, district, and national service.

Award Criteria
Criteria for the award include past and current evidence of outstanding ECD service in the following capacities:

East Central District Platinum Award – Nomination Process
Nomination materials should be submitted to the ECD Board of Directors by the current PRSA chapter president who, by the submission, verifies that the nomination has the support of that Chapter’s Board of Directors. The ECD Board will review the nominations and be responsible for making the final selection at the September board meeting and annual retreat.

Nominations should be submitted via this form: https://forms.gle/qgaf7baJAfqepaSh7  The nomination should define the service positions held as well as the impact and the contributions made by the nominee. Articles or books authored by a candidate that has enhanced the knowledge of others in the profession should also be identified along with the awards, citations and honors the candidate has received for his or her professional service.

Up to 10 documents of support are allowed in support of the nomination and verifying the contributions should be included with the nomination form when possible. Paid employees of the ECD and current sitting members of the ECD Board are excluded from nomination.

Please complete the nomination and supporting materials by August 31, 2021 by 11:59 EST.

If you have any questions or issues, please contact: Adrienne Wallace, ECD Immediate Past Chair at adrienneAwallace@gmail.com 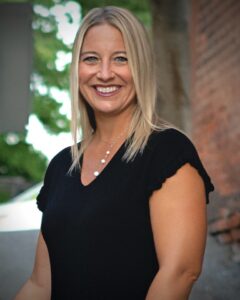 The PRSA ECD board of directors accepts nominations from around the district and then votes on a selected recipient who has achieved a distinguished service record to PRSA at the local, district and national levels.

Dr. Agozzino has provided service to the Central Ohio PRSA Chapter as a committee chair and a member of the Board of Directors. At PRSA’s national level, she serves as the chair of PRSA’s Educators Academy and as the National Faculty Advisor for PRSSA.

Congratulations to Dr. Agozzino for this highly deserved award!