HomeBlogHonoring two of our greats…

Honoring two of our greats…

I opened my email one day to find an invitation to an event I never imagined happening.  Marilyn and David Shank were closing the doors on Shank Public Relations Counselors after 30 years…and I was invited to the party!

My history with them goes back longer than any of us will admit, but I met them in the late 1980s when I served on the East Central District (ECD) Board of

Directors with David Shank, APR, Fellow PRSA, who was then chair of the District.  It was my first exposure to the East Central District and one that would open many interesting doors over the years of our friendship.

In August 2000, I became the first administrator of the East Central District and have since had the privilege of working for both Marilyn Shank, APR, and David when each served on the East Central District Board of Directors, David for the second time, through the various offices and as chair.  They brought new and exciting programs to the ECD and the chapters it serves, keeping the District on the cutting edge of leadership within PRSA. During his first term as chair, David was responsible for designing and implementing the QuickStart leadership conference model that we still use today and it was a “first of its kind” event for a PRSA District. Marilyn took the QuickStart conference beyond our 17-chapter, six-state border, by developing the “QuickStart in a Box” program that has been implemented by a number of PRSA’s other nine Districts.

Both have been leaders and mentors to their 100+ interns and many other professionals across the country.  Listening to the recap of their career highlights was impressive and taught me even more about them as people and as consummate professionals than I already knew.  Still, I had to laugh when I got to the party.  As a good association executive and public relations person, I had sent my RSVP, indicating I’d be there.  However, none of the name tags on the table were mine.  Seems they didn’t believe I’d make the nearly five-hour drive from West Virginia to Indiana to celebrate them! 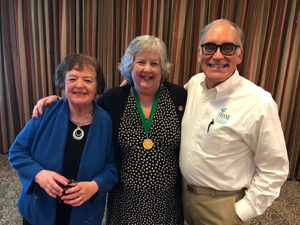 The East Central District Board of Directors honored them with a gift certificate to an iconic Indianapolis restaurant (thanks to Andrea Farmer for the idea!).

On behalf of your friends in the profession, may you enjoy retirement and the time with your family and those two adorable grandsons (and the soon-to-be third grandchild)!

Thanks for the excuse to wear my Fellows medallion!!!